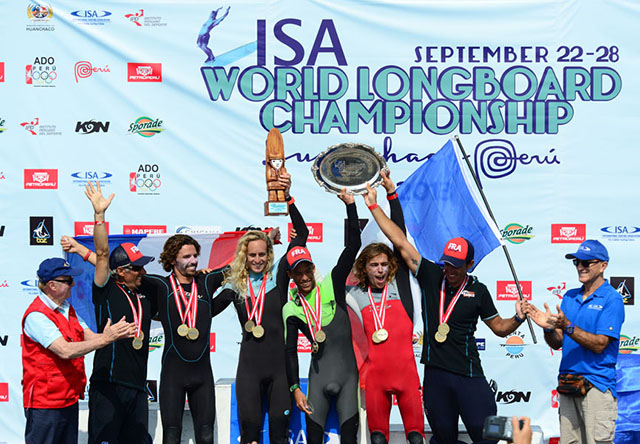 All the Individual Gold Medalists (from left to right): Hawaii’s 14-year old Honolua Blomfield, the only girl in the Junior’s Under-18 Final, South Africa’s Simone Robb in the Open Women’s, and France’s Antoine Delpero in the Open Men’s. Photos: ISA/Rommel Gonzales

Following an amazing week of great waves and exciting surfing performances, the 2013 ISA World Longboard Championship, in historic Huanchaco, Peru, is officially over.

France will go down in the history books as the Gold Medal Team in the first stand-alone ISA World Longboard Championship.

President Aguerre continued, “A very special thanks to all of the athletes, the whole town of Huanchaco, the public and private sector of Peru, and especially, the Peruvian Institute of Sport, the Association of Olympic Athletes of Peru, the Peruvian National Olympic Committee, the municipality of Huanchaco, and our dear event organizer of this first World Championship, Karin Sierralta.”

Huanchaco’s great surf during the Final Day of competition continued. The waves were in the 3-5 feet range, bigger than previous days, with calm winds all day long, providing exceptionally long rides for the surfers to perform at their highest level.

The first final in the water was the Junior’s Under-18, where Hawaii’s Honolua Blomfield won the Gold Medal earning 15.00. As one of only two girls entered in the Junior competition, Blomfield had a difficult task, but managed to dominate most of her heats throughout the event, including the final.

“I just feel on top of the world! I can’t believe that I was able to make it this far,” said the elated Hawaiian. “On my first wave, a set wave, I just played safe and did a couple of turns and some nose riding and ended up getting a seven. I was just amped throughout the whole heat. Then another really long wave came through, a little nugget that peeled all the way to the inside and I ended up getting another seven on that one.” These two rides added up to a winning performance. 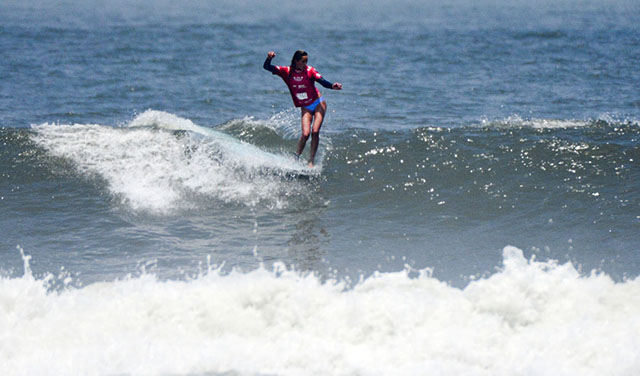 “I started up with a bang! I got the first wave of the heat, which was an 8, and I was really lucky to get that one,” commented the South African in her post-heat interview. “It’s really cool to be the first Female ISA World Longboard Champion. I’m really happy. My kids will wear my Medal when I get back home. This event was amazing and the other women were so nice to compete against; they were all are really friendly.” 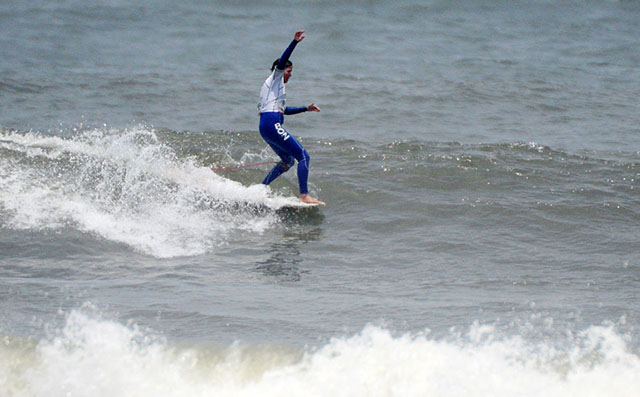 In the Open Men’s Final, France’s Antoine Delpero won the Gold after posting two big scores of 9.00 and 8.20, an impressive total heat score of 17.20. Great Britain’s Ben Skinner had been in form all event, but felt just short in the Final, earning 15.60 and the Silver Medal. Brazil’s Phil Rajzman won the Bronze Medal, earning 12.03 and South Africa’s Thomas King the Copper Medal (11.97).

“It was a really hard and close Final, and everyone got good waves,” said Delpero as he waved his third ISA Gold Medal in his career having previously won Gold in the Longboard division of the ISA World Surfing Games in 2009 and SUP Surfing in the 2012 ISA World SUP and Paddleboard Championship.

“You never know if you’re going to have a good wave because the wave doesn’t opens up until near the end, where the strong scoring potential of the wave is. I tried to do my best and I’m super happy about that!” 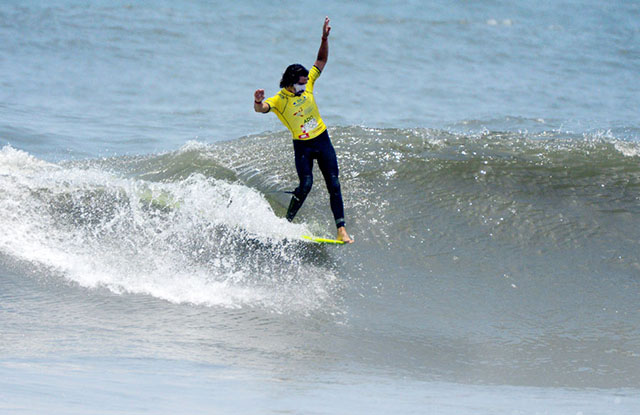 The last event in the 2013 ISA World Longboard Championship was the exciting ISA Aloha Cup, a tag-team competition.

Following the competition, the Closing Ceremony took place to present all of the medals and trophies, and to bring an end to an incredible week in one of the most historic surfing communities in the world.

For the full event coverage with daily videos and photo galleries visit- http://isawlc.com/