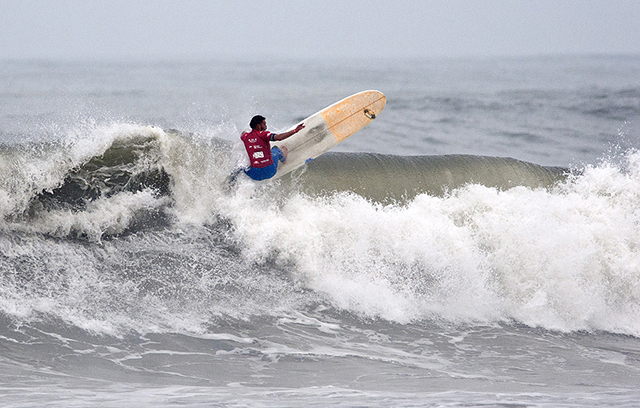 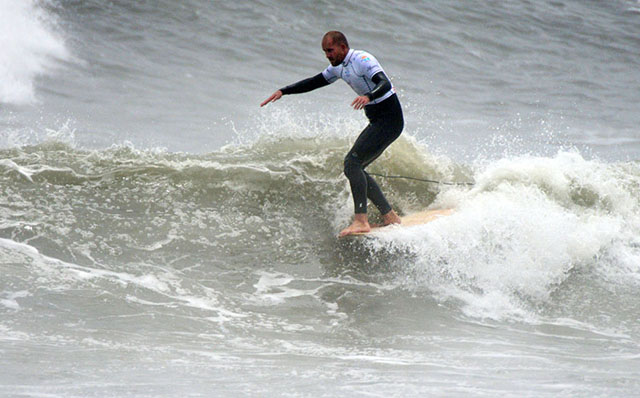 Taylor Jensen from USA is well known as a power surfer, but today he finessed his way to victory with his nose riding skills. Jensen advanced in first place in one of the day’s toughest heats against local favorite Piccolo Clemente (PER) and Ben Skinner (GBR). Photo: ISA Michael Tweddle

Day 1 of the ISA World Longboard Championship (WLC) kicked off on Monday with firing waves and incredible performances in Huanchaco, Peru. The surf during the first day of competition ranged from 6-8 feet with many rides 200 yards long.

The waves at Huanchaco allowed the surfers to perform multiple maneuvers in a ride including critical turns, big cut backs, huge floaters and nose rides. The surfers had to pick their waves wisely and be tactical because the paddle back out to the line up was long. Some surfers opted to run back up the point on the beach.

“We had an incredible first day of this historic ISA World Longboard Championship,” said ISA President Fernando Aguerre. “Huanchaco is living up to expectations by delivering excellent 6 foot surf for the world’s best longboarders. It’s a beautiful thought to picture Huanchaco’s locals thousands of years ago surfing these very same waves on the traditional “Caballitos de Totora” (reed fishing boats), and now we have the opportunity to compete on Huanchaco’s waves and share them with the world. It’s just perfect!” 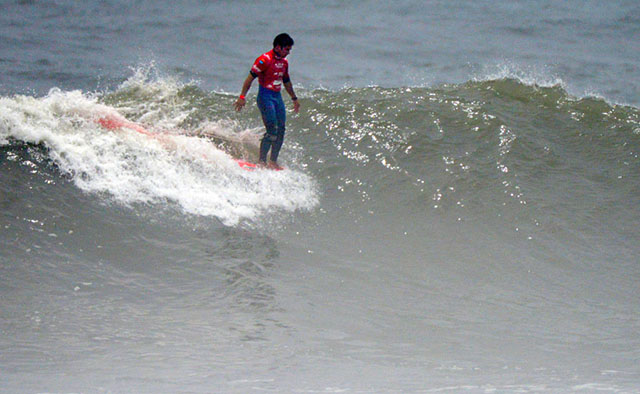 The first day featured Qualifying Round 1 for Open Men, Open Women, and Junior Under-18 for a full day of action-packed surfing. 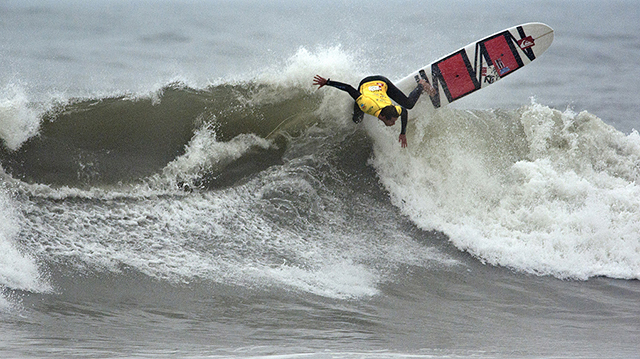 “It’s nice to be here in Peru, here in Huanchaco,” said the South African, while his teammates showed their support blowing traditional vuvuzela. “It’s my first time in South America. The country is nice and people are friendly. I have been here over a week now so I’m comfortable and I was feeling good out there. The support of my team and all my family and friends back home helped me a lot, so it felt good to get the right waves, which allowed me to get the scores. The surfing is unbelievable and I’m happy the ISA put on this contest and proud to be here!”

King continued, “The wave is quite difficult here. It’s a lot different than what we have in South Africa. I think the strategy is to make sure I get waves. The wave changes all the time so every heat is different.”

“It was a tough heat, it was very difficult,” said an elated Dupont. “My board is not ok, it almost broke. My first wave wasn’t good so I had to go back out and catch another. Catching the wave is not so difficult but you have to choose the good ones. I like the wave, but you have to paddle a lot. I expect to surf heat by heat and hope to win.” 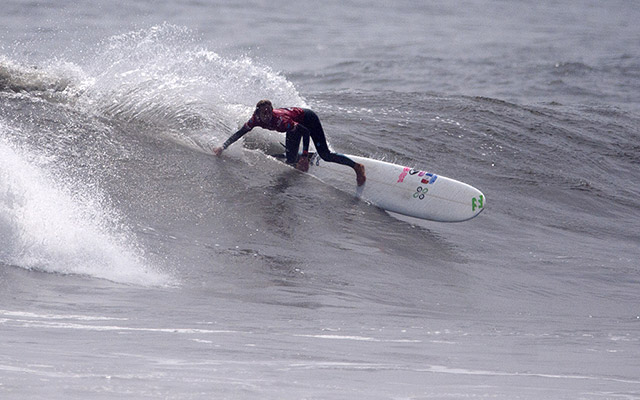 In the Junior’s, one of the standouts was Australia’s William Crowe, who earned a 10.56, defeating New Zealand’s Jordan Griffin (8.93) and USA’s Nick Anderberg (6.0).

“It was a hard heat, it’s a lot of paddling out there because of the strong current, but once you get out in the spot and get one it’s quite good out there and fun,” commented Crowe. “I was lucky to get a couple of good ones. The strategy is to get one wave quickly and then back it up with another one, and if you have time, find a better one. Overall, the Australian team has done pretty good today.”

The only Team Canada competitor, Lola Mignot, was one of two girls competing in the Juniors U-18 division against many of the world’s best boys. Lola gave her best effort in the challenging conditions, but in the end came up fourth, moving her to the repechage, or second chance round

“I’m really not used to this kind of wave and it’s really difficult. I’m Canadian but I live in Mexico, where the sea is warmer and with smaller waves. It’s a really nice experience to be here in Peru, to practice on big waves. It’s not difficult at all competing against the boys, as I’ve done it since I was little and it’s really fun when you beat them.”

The 2013 ISA World Longboard Championship is a double elimination competition, with the first two surfers always advancing to the next Qualifying Round. Surfers in third and fourth place move into the Repechage Round, giving them a second chance to advance. However, another third or fourth place finish, and they will be out of the competition

The 2013 ISA World Longboard Championship resumes Tuesday at 7:40am with The Morning Show.