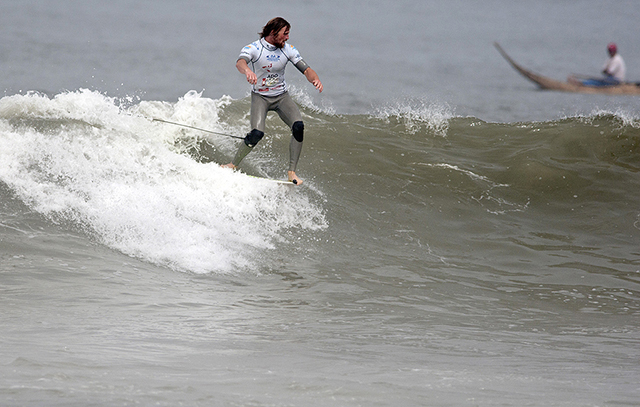 With critical nose rides, Great Britain’s Ben Skinner earned the highest heat score of the day of 16.27, advancing to the Grand Final in search of the Individual Gold Medal. Photo: ISA/Rommel Gonzales 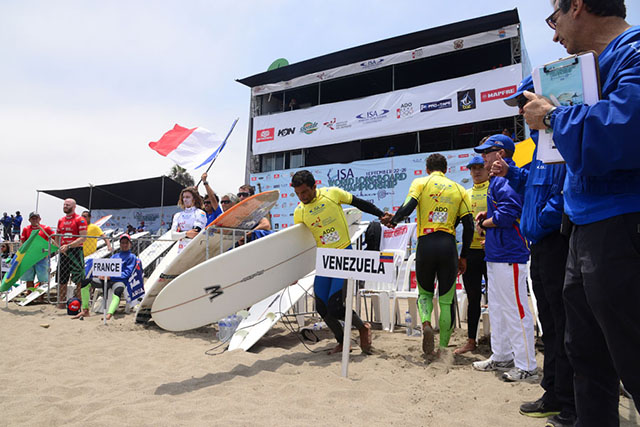 The exciting ISA Aloha Cup Semifinals, a tag-team format competition, took place today. Every team is made up of 4 surfers, and each surfer must catch 3 waves in a one-hour heat. Photo: ISA/Tweddle

The 2013 ISA World Longboard Champions will be crowned on Saturday. All of the Individual and Team Gold Medals, plus the ISA Aloha Cup will be decided on the Final Day of competition.

The surf conditions at the historic point break in Huachaco remained in the 3-4 foot range with long walls, allowing the surfers to perform a variety of maneuvers. The highest scores of the day came from rides where the surfers displayed power and flow with a mix of traditional and high performance longboard surfing, which is the criteria established by the ISA for judging.

“We are one day away from crowning the Team Champion and all of the Individual Medalists,” remarked ISA President Fernando Aguerre. “Huanchaco has blessed us with great waves all week long. This historic surf break and the surrounding community have an amazing vibe that dates back 4,000 years with the use of the Caballitos de Totora at the same location we are holding the contest today. I invite everyone to enjoy this unique experience by watching the Final Day of competition tomorrow on the live webcast.” 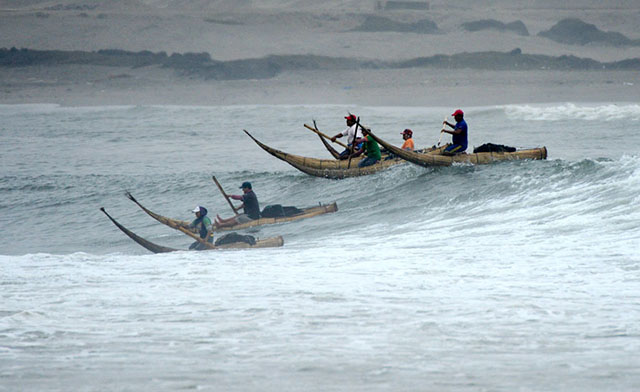 “It’s a big dream of mine to be in the Final again, I’m just at a loss of words,” said the elated and emotional British surfer, Skinner. “I had so much support from my friends, family and from my country, this one is for all of you, for sure. My main inspiration are my kids. The ISA has done a great job putting on this great event, and I feel really privileged to be here in the first ever ISA World Longboard Championship, and make it to the Final. I just can’t believe it!”

Skinner and King will be joined in the Grand Final by the 1st and 2nd place finishers of the Men’s Repechage Final, featuring Phil Rajzman (BRA), Piccolo Clemente (PER), Antoine Delpero (FRA), and Edouard Delpero (FRA). 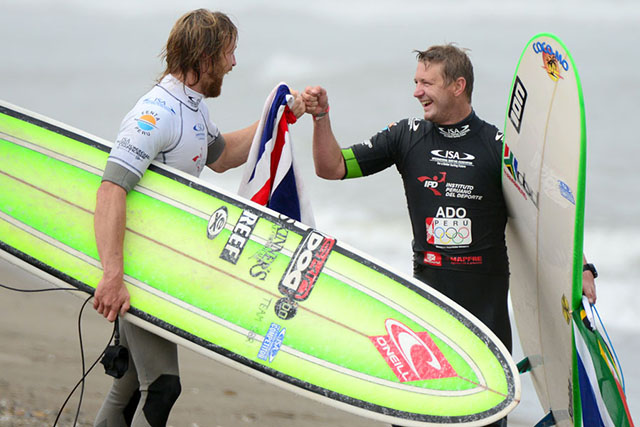 “My heat was incredible, against the two Peruvians and the Hawaiian,” said the relieved Brazilian. “I took a really good wave, and I started with a Hang Ten and then some radical maneuvers that gave me good points. I was in third place and that wave put me in first. I’m really happy and feel lucky to be here in Peru, it’s an incredible place.” 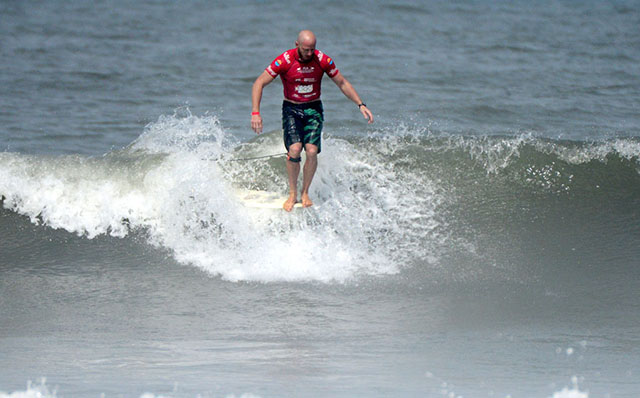 On the Women’s side, France’s Justine Dupont and South Africa’s Simone Robb advanced directly into the Grand Final. The South African managed to squeeze in second place, earning 9.37, sending to the Repechage Final Megan Godinez (HAW, 9.27) and Mary Gil (ARG, 5.66).

“Today the conditions are really tricky,” said Robb. “The strategy is to get two decent waves and perform the best you can. Our Team made it to the Final Day of the competition, which is great. Good luck to everyone else that is surfing in all of the other teams. My team rocks, I love South Africa!” 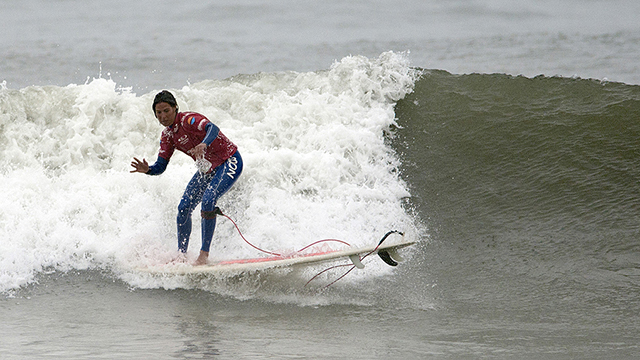 Simone Robb (RSA) pulled out of her bag of tricks a “helicopter,” rotating her board 360 degrees. Photo: ISA/ Rommel Gonzales

Dupont and Robb will be joined in the Grand Final by the 1st and 2nd place finishers of the Women’s Repechage Final, featuring Rachael Tilly (USA), Karen Mendiguetti (PER), Megan Godinez (HAW), and Mary Gil (ARG).

In the Junior’s, Hawaii’s Honolua Blomfield and France’s Martin Coret advanced directly into the Grand Final. The Hawaiian is the last female remaining in the division and won her heat earning 11.94, defeating Marting Coret (FRA, 9.6) and sending to the Repechage Final Ethan Pentz (RSA, 8.97) and Caio Santana (BRA, 8.90).

“I felt really good in the water, I’m just doing my thing,” said the Hawaiian. “I’m so happy, as I did not think that I could make it this far, surfing against all boys, I just have to be at their level and compete as good as them. I’ve never surfed waves like this, but it’s fun and different surfing a left this long.” 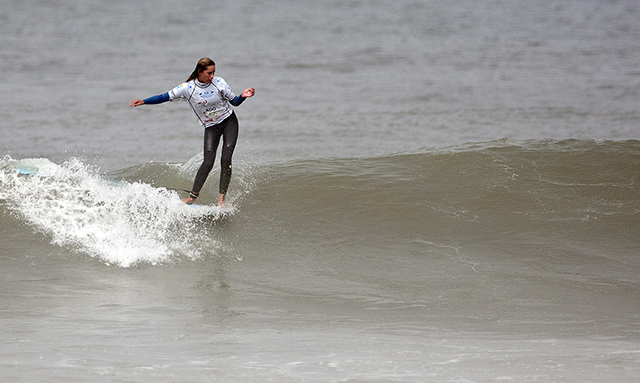 Blomfield and Coret will be joined in the Grand Final by the 1st and 2nd place finishers of the Junior’s Repechage Final, featuring Yoissis Delgado (VEN), Surfiel Gil (ARG), Ethan Pentz (RSA), and Caio Santana (BRA).

Australia, Peru, France, and Brazil will face each other in the ISA Aloha Cup Final on Saturday. 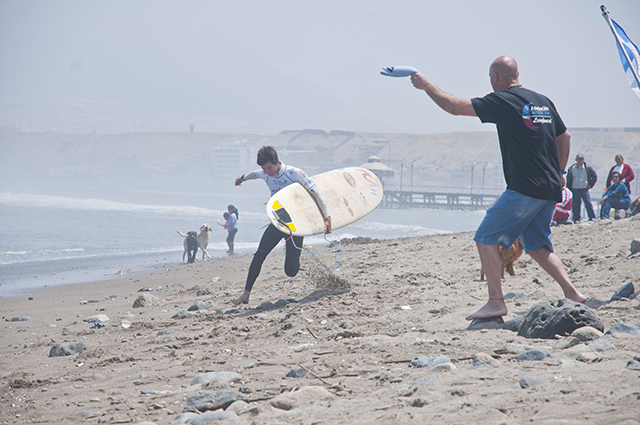 With only 15 minutes to paddle out, catch 3 waves, and come back to tag your team-mate, speed is a key part of the strategy during the Aloha Cup. Photo: ISA/Rommel Gonzales

With all members of their National Team still in the competition, Team France and South Africa are in the lead and will fight for the coveted Team Gold Medal on Saturday. Peru and Brazil, in 3rd and 4th respectively, are not far behind and will be looking to cause major upsets on the Final Day.

Team Standing after Day 5 of competition:

The 2013 ISA World Longboard Championship will resume Saturday, at 9:40am with The Morning Show featuring members from Team Hawaii.